There will be no Irish Team at the Tokyo Olympics yet 7 winners stepped off tatamis at the recent Qualifying Tournament in Paris, the last such event before karate takes the historic step into the Tokyo Olympics. 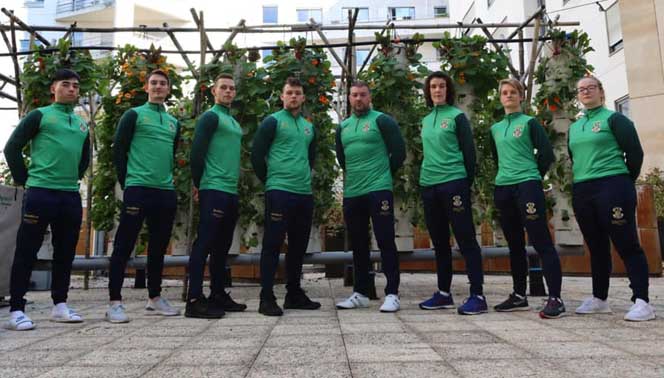 In June, 7 athletes and their coach undertook a journey of dreams. Destination; Paris Qualifying Tournament. Aim: seek selection to represent Ireland in karate at the forthcoming Tokyo Olympics.

As always, I sat glued to the screen, watching, fingers on keys waiting to share news of our athletes with the media. As always, I asked for their feedback, Naomi Osaka's word ringing in my ears. But, without having to wait for reflections I understood what I needed to write.

The pandemic year gave and took away, it gave opportunity for some to finish school and try get selected for the team, it gave time to others to regain health whilst producing the most difficult training condition for all of our athletes. They trained on zoom, in sheds, against punch bags instead of training partners, unable to compete, challenge and be challenged. In words of Mairi Kerin: 'All of my preparation had been socially distanced which for a sport that relies on contact proved to be quite a challenge.' And yet, regardless of the age; whether you are 19 or 38 the dream is the same, pressure is the same. In words of Eamonn Pegley, the National Kumite assistant coach who accompanied the team: 'as a coach the pressure is on as well. You want to do your best for them to help them realise their dreams.'

Chris and Sean McCarthy stepped into the world of senior karate once, in early 2020 at a Premier League. Qualifying tournament presented an additional challenge to lack of training and competing as the Olympic Categories had been merged and Chris had to make a massive weight adjustment to enter the -75kg category. In the end, the experience of the opponent who went on to qualify in within the group and qualify with the gold ticket prevailed.

Sean McCarthy competed in the +75kg received a bye in the 1st round, fighting off Indonesian competition confidently in the 2nd round with a 3:2 score. He proceeded though the 3rd round against Danish opponent with a 1:1 score on a 'Senshu' priority received by competitor on the first score of the match. He was stopped in the 4th round on a 0:3 result having been outreached by the height of the Tunisian competitor. Despite winning the group Slimani Thameur of Tunisia did not proceed to semi-finals extinguishing Sean's opportunity of repecharge.

Eamonn Pegley praised the young athletes as giving a huge performance: " I think Chris gave a great account of himself given everything and I have no doubt he will come back stronger than ever. … [Sean] put in a huge performance and came so close only to lose out at the final hurdle before the final. Sean had the same problem, a lack of tall training partners in the run up made it very difficult to deal with the reach advantage of his opponent. Huge credit to the lads and their coach Stephen O'Callaghan who worked so hard with the lads to get them ready."

Hugh Connolly, the youngest to select, stepped into the Senior male kata event only to share the draw pool with some of the most talented and experienced karateka, with Ariel T. Guttierez of the USA taking the gold qualifying ticket. He felt he could have pushed more on the score but overall felt:" As it was my first senior WKF competition I got to learn plenty of things, a big one being the strength of these older guys are on a different level….The Experience will definitely aid in my development." No doubt, the experience will have lasting and exciting effect.

Mairi Kerin is perhaps our most experienced athlete. And, if you had not read it before, Mairi is our bionic woman, for whom a challenge of pandemic, distanced training and sparring only on the faithful punch stand fondly named Bob, was topped with becoming the first recipient of the world's smallest pacemaker a year ago to the start of her journey to Paris.

Kerin drew 0:0 with Mexico in the second round of the -55kg female kumite. Coach, Eamonn Pegley commented Mairi " could have got the decision given her work rate however only one of the judges seemed to agree." Kerin was similarly disappointed:" watching it back I had the skills to beat her. I wrongly assumed that she was a strong contender after her first-round assassination of Belgium 7-1. In the past I have struggled with tension which causes me to focus too acutely and eventually loose concentration. So over lockdown I have been working hard on staying relaxed in movement which then allows my mind to engage more completely in the moment, but this loose approach may have come across as being too casual when it came to hantai. I lost on judge's decision." "This Olympic qualifying event was a once in a lifetime opportunity. I had put my working career on hold and spent all of my savings pursuing one goal." For now, "I will stay fit, enjoy some family time, and wrap up my doctorate degree, and see what new opportunities come my way."

Justyne Collins +61kg Female kumite athlete and a primary teacher received a send-off from the school "The children were fantastic. I teach infants and they were so excited for me when they found out! The school organised a green day and got a banner made up for me as a surprise. A lot of children in the school made cards and drew pictures to wish me the best of luck! They were all brilliant!

And, the "competition has been an amazing experience. I am so proud that I got to represent my country alongside so many other incredible athletes. Unfortunately, I didn't manage to qualify for Tokyo and of course I am very disappointed, but it doesn't take away from this experience. I was happy with my training on the run up to the competition. I worked hard, I felt sharp and I was so excited. Unfortunately, I feel nerves got the better of me on the day and I didn't perform like I had in training. This is incredibly disappointing, but I have to learn from it and move forward."

Una Fynn, female kata balanced her training with studies and work, but unfortunately did not proceed from the first round. Rory Kavanagh, in -67kg male kumite, balanced his studies, with training and travelling to competitions as Europe begun emerging from the pandemic with no coach at his side and having to isolate from friends and family in order to keep the opportunity of training and qualifying alive. Reflecting on the whole experience coach Eamonn Pegley said:" For me it was one of the tougher tournaments I have ever been to, not only in the fact that all the competitors there are the best of the best, but also because of all the obstacles. Travel, accommodation, meals, PCR tests and the logistics of coming and going from the hall were all issues that needed to be dealt with before anyone even got onto the tatami. Huge effort went in by Martin Clynch, Paul Brennan and Chris Kelly to make my life easier and they have no idea how grateful I am because without their efforts it would have made my job as a coach significantly more difficult and of course Sport Ireland who helped with the funding.

As for the event itself the restriction of wearing a mask while trying to coach made it very difficult for the athletes to hear what I was saying from the coaches' box and the VR system never seemed to go in our favour. Scores that seemed obvious to me from the coaches' box were rejected by VR. The card system is something that can be a nightmare for coaches. You have a split second to make a decision while still trying to focus on the fight and when it doesn't go your way you're left wondering 'what if I'd waited, maybe if I didn't play the card there this would have happened'. At the end of the day you make a decision in the moment in the best interests of the athlete and unfortunately on this occasion it just didn't go our way. Even with all of this, the team spirit amongst the group was amazing and I couldn't have asked for more from any of them. They should be all very proud of themselves as I know everybody else is. Irish karate is definitely on the rise, and I have no doubt the future holds a lot if success for our talented athletes."

Indeed, the 7 have and will go on to inspire generations from the youngest primary children seeing their teacher representing their country to those seeing medical miracles continuing their in sport at the highest of levels and all our members who have continued to train in their rooms, gardens, on balconies, who took to our zoom squad sessions to keep on top of their form and ready to represent their country whether at cadet, junior or senior level.